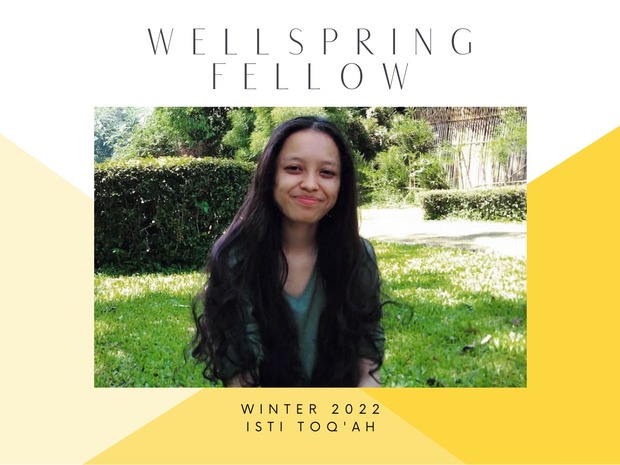 This winter we are delighted to welcome Isti Toq’ah as our next Wellspring Fellow. Isti is a peace educator based in Jakarta, Indonesia and a graduate of UPEACE (University for Peace) in Costa Rica and Ateneo de Manila University in the Philippines. In 2016, as part of her graduation capstone, she founded a grass-root movement, PANDAI (Indonesia’s Peace Education) Community, which focuses on peace education based on Indonesia’s local wisdoms. Along with PANDAI, Isti leads the initiatives Humane Human and English for All in Indonesia.

After years of bullying and radicalism, a peaceful encounter in 2009 with her “first human friend,” a Catholic Chinese-Indonesian, opened her to a life-long endeavor into interfaith dialogue and community. We started here at this encounter to learn more about what drives her to peace education and who has helped her along the way.

The Well (TW): So I wanted to begin with the encounter you had in 2009 that you say changed your life. Could you share more about that experience and how that relationship changed you?

Isti Toq’ah (IT): Sure, I'm still quite good friends with this girl. Her name is Jessica Amelia. She is currently living in Bandung just two hours by car or train. So she was my first human friend because I got bullied a lot. Many people thought that I was weird, including my teachers, because I questioned many things, including religion. My family is Muslim and so I questioned Islam, asking why I should learn to read Holy Quran? Why should I pray five times a day? What should I think about Allah or God?

I was very isolated and because of this a radical Muslim group targeted me. The group that radicalized me is one of the biggest Muslim political parties in Indonesia whose members get important positions in parliament and ministries. In their party's symbol, there's "rice" which the meaning is not similar to the one in Pancasila, Indonesia's state philosophy.

In the morning before school I usually went directly to the mosque because I was one of our young leaders there. But that morning, I was helping in the classroom sweeping the floor and I saw this girl sitting in the front near the teachers desk, and she seemed so shy. She was drawing something and I smiled at her and she smiled back. She was not scared when she saw my long hijab that went to my knees. So I approached her and asked her about her drawing. She said it was a Japanese animation and she was surprised that I was interested! We talked for a little more and she asked me to sit with her. I had been bullied by a classmate who forced me to sit with her, but that day I moved to sit with Jessica and that day I got my freedom. Almost every day after that I went to her house for free lunch and studying together. She is Catholic and Chinese-Indonesian. So she was different from me but we were super good friends and it opened me up to the first of many interfaith friendships.

After that day, I left the radical Muslim group and shortened my scarf from my knees to my neck. I was tired of waiting for answers and being told that I should not question the teachings. They called me infidel or unbeliever. But I did not care. I wanted to create my own heaven on earth because they could not prove to me there would be a heaven after.

TW: Now, as an adult, with much more world experience, how do you approach faith or spirituality?

IT: I have been an agnostic for several years since I decided to take off my hijab in 2018. Since then I decided to return to Islam by my own choice, my own interpretation. And I chose the path of Sufism. Sufi comes from an old Arabic word that means woolen. They don't ask as much as other Muslim communities that I have encountered. They just want to love simply with compassion. That's why the representation of wool is like, whoa, it's simple and it's warm.

TW: I know that you created PANDAI initially as a graduation capstone project, but can you tell us a little more about the start and how it has evolved?

IT: PANDAI began when I was at UPEACE in Costa Rica as a capstone project. In the beginning, the inspiration was friendship, but later on the journey of the movement we grew into something bigger, not only interfaith. Through different members we have gotten in touch with refugees, gender minority groups, climate change issues, etc. It has become so big, unexpectedly because we got more friends involved.

After I graduated, I brought PANDAI back to my hometown where that same radical group was trying to brainwash the youth in the mosque. We brought it to the school as English language classes but really we were teaching them peace.

I choose to continue PANDAI because I felt like this is a beautiful project from my heart, from my wound.

Before the pandemic all of our meetings were offline. We went to churches, mosques, Hindu temples, schools and other places of gathering. We conducted peace education, led community surveys, cleaned up spaces, and held lunches for interfaith dialogue.

In September 2019, I was hit by a government car that left me badly injured. I had just left a conflict transformation training for peace day and I was on the back of a motorbike when we were struck. I got stuck underneath the car leaving me badly bruised and in a lot of pain. I took one month to heal and put everything on hold.

Then the pandemic came and I lost my housing and job and was struggling with suicidal ideation. I was rescued by a female preacher from a Protestant church, GKI (Indonesia's Christian Church) Kayu Putih. I was cleaning up. She is my guardian angel. She is now like my older sister that I never had because I am the oldest child in the family. She took me to her house and I lived with her for nine months where I slowly healed and found myself again. Her name is Rev. Yesie Irawan Lie. She is also a Chinese-Indonesian like Jessica.

In about August 2020 I started to open up to social media again with the idea of hosting Instagram Live for PANDAI and some friends from UPEACE and past collaborations helped me get PANDAI back up and running. These friends were from all over the world, Costa Rica, Malawi, Lebanon, Philippines, France, Canada and Afghanistan, which opened up PANDAI to more than just Indonesia.

And in the end of summer 2021 I began doing the communal meditations on Zoom, returning to the people. I really miss in-person gatherings so much. Heart to heart collaboration, the hugs, the handshakes, you need something real. You need to hear the brooms cleaning up or wiping the sweat off a friend’s cheek who is wiping the window. It is something small, but super priceless.

TW: It has been quite the journey! Now with the opportunity for Zoom, has there become a regular group of folks attending meditations?

IT: I put the people of PANDAI into two types. The first one is called Sahabat PANDAI (Good Friends of PANDAI). So that is something closer than friends, more like family. It’s usually my own close friends who can help me anytime. I try my best to do everything by myself. If it's super urgent, I will ask for their help.

And then the second one is Relawan dan Peserta PANDAI (Volunteers and Participants of PANDAI). Which means they are volunteers or participants. It’s free. It’s like open recruitment for the public.

It has been amazing, I see PANDAI as a magical unicorn, because when I need help, it shows up. I love that. I have never wanted to make PANDAI into an NGO or official organization. PANDAI is for the people. As long as you have a good heart and good intention, you are a friend of PANDAI.

TW: Who or what do you turn to for inspiration?

IT: Gus Dur has been one of my biggest inspirations because he was blind and became the first person with disability who was chosen to be our president of Indonesia. He has since passed away but I am so proud of him. He loved to laugh. He was not rich and I want to be like him. He emanated peace.

My other inspiration that I need to mention is the female preacher who saved me for nine months, Rev. Yesie Irawan Lie. If not for her, I would not be here. She is my guardian angel.

My strongest inspiration is Sami Yusuf. He is a musician and a composer. He plays many old traditional musical instruments. After I got out of the hospital from the abuse of my ex-boyfriend in Costa Rica, and I had graduated, I said I want to meet Sami Yusuf.

And, he found me.

So in January 2018, close to my birthday. I went to Oman. I booked the economic flight and purchased a seat for the concert. I did not expect anything, just come and watch, and then go. I posted on my Twitter and one of the important people in Oman replied saying he had a golden ticket for meet and greet, and asked if I wanted one? I immediately thought be careful, this could be human trafficking. So once he proved it was real I decided to go.

So I showed up and I was the only poor person, with very ugly clothes, everyone else was in gold. I was also the smallest person in the room. I get the seat on the most back of the row for a session of questions and answers. The MC kept calling on everyone else, even though my hand was raised. Finally at the last round Sami Yusuf asked if he could choose the question. And I think you can guess that he chose me.

When the MC gave me the mic, Sami Yusuf asked, “Where are you from? I want to hear your stories.” I thought, is this real? I told him I had just gotten out of the hospital and I got my second life because of his songs. He asked me which songs and he began to play them. After he said “Please don’t go anywhere. I need to take a picture with you."

The next day at the concert I was 10 minutes late and when I arrived they led me to my new seat, in the very front row. That really gave me hope that when you love something by heart, the universe meets you there.

This interview was mindfully edited for clarity and word count.

The Wellspring Fellowship is a four month virtual residency designed to lift up and share the work of our fellows, and to broaden our understanding of how to best serve personal growth, relational empathy and collective, public reconciliation and healing.

Additionally, Isti is pursuing her dream of a Ph.D in Peace Education from UPEACE in Costa Rica and has launched a campaign for financial support. You can learn more about her Ph.D plans and how to support her here.