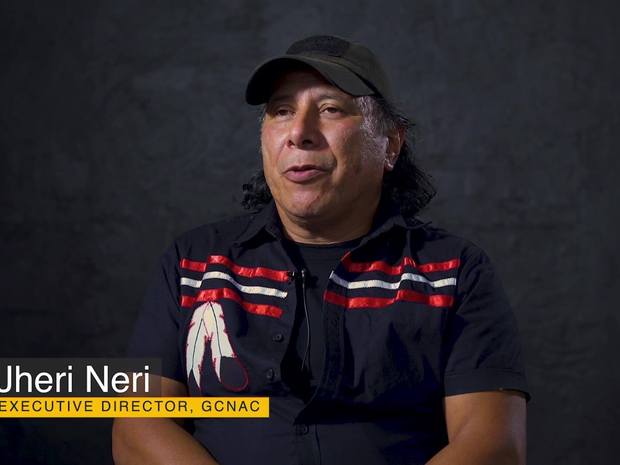 When I spoke with Jheri about his inspiration for the poem, he described writing this poem as a catharsis to the usual asks by organizations and individuals to compose a standard land acknowledgment. What can sometimes feel like just being a part of someone's checklist to do “right,” Jheri took this opportunity to share how the land, people, and spirit are all one, that a land acknowledgment is not just for the physical land, but the people that were a part of that land, the rituals to the land and communion with all else that is part of the land.

If you are interested in writing a land acknowledgment for your area, Jheri’s advice is to first ask yourself why and to really work from that reason. But a land acknowledgment is not the end of being an Indigenous ally. Jheri reflected that “We need to think beyond the paradigms of allyship, we have gotten too comfortable with the status quo.” (The GCNAC shares a great Indigenous Ally Toolkit for more info.)

Check out the Greater Cincinnati Native American Coalition website to read, learn, sign up for their programming and support their efforts to preserve and represent Native and Indigenous people through education, advocacy, and support.

The Land Acknowledgement
By Jheri Neri

This is the part of the program
where you say the land acknowledgment the part
that is supposed to make you feel better
about yourselves
where you acknowledge
those people whom you googled
Removed and stashed on Wikipedia
And whose land
you are now standing on
Your words
colonized
before they even
leave your lips
Misconceptions and
Dogma led narratives
Convincing you
That the people
And the land were
ever two separate things
Fire and ash
Mud and soil
From birth
To ceremony
Wrapped in red cloth
And tied to a tree
Our joys and accomplishments
Our odysseys and tragedies
Our blood and flesh
Our sorrow
Our death
Back to fire and ash
And to mud
And to soil
Returning to this land
Over and over again
Since before the beginning of time
Indigenising your mindset
Resetting your spyglass
Acknowledging this understanding
That the people
And the land
Are the same
Is more important
Than the words
Which just left your mouth.

Jheri Neri ( Ndé / Diné Nations ) spent the first 12 years of his adult life active duty in the U.S. Military. After being Discharged Honorably, he spent the next few years drinking, making a lot of bad decisions and finding sobriety. Since then, he served as a board member with the nonprofit Village Green Foundation for 5 years, and worked as a volunteer empowering kids and adults in the neighborhood by showing them how to build bikes with the MOBO bicycle cooperative. As an Indigenous Activist, Jheri has spent time responding to calls to action in Standing Rock, Flint Michigan, D.C. and many other places, and was instrumental in the abolishment of Columbus Day and creation of Indigenous Peoples Day in the City of Cincinnati. He is a member of the Anti Racist Coalition in Cincinnati, working with organizations such as Mass Action for Black Liberation, Ohio Justice and Policy Center, and Intercommunity Justice and Peace Center. Jheri volunteers as the Acting(visiting) N.A. Chaplin for Cincinnati Children's Hospital, and has done work with equaSion in Cincinnati on the Religion and Interfaith and Social Action Advocacy Subcommittees, and the Kentucky for the Commonwealth Racial Justice Committee. Jheri is currently the Executive Director of the Greater Cincinnati Native American Coalition and has been sober for 8 years.