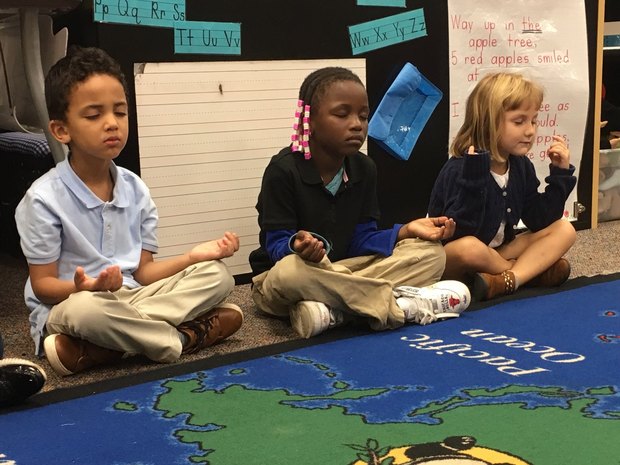 This spring, The Well brings together The Cleveland Orchestra, Cincinnati Symphony Orchestra and Columbus Symphony for an innovative commissioned work, in which members of each Ohio symphony will play one movement and participate in the final movement. The 12-minute piece, influenced by feedback from students who participate in Mindful Music Moment, will be composed by Dr. Brian Raphael Nabors. This inspiring new work, the first collaborative performance of all three orchestras, will be played over four weeks in May for the school year-ending weeks of Mindful Music Moments. This is the second commission by Dr. John and Susan Tew for Mindful Music Moments, a program of The Well.

Mindful Music Moments brings classical music and mindfulness to 260 schools (229 in Ohio), daily, in partnership with three Ohio symphonies, Cincinnati Symphony Orchestra, The Cleveland Orchestra, and the Columbus Symphony. Students, K-12, who participate in Mindful Music Moments will influence Dr. Nabors composition with short responses about what they think this piece should sound and feel like. Dr. Nabors will then compose the short, four movement work for string quartet.

“I very much look forward to being inspired by all of the submissions from students in our Ohio schools,” Dr. Nabors said. “I know embedded within is a deep love of art and their community. I can think of no better artistic representation than that of our Ohio partner orchestras. I can already feel the sense of pride the students in these cities will radiate with when hearing their orchestra represent the community they love. With this piece, I hope to encapsulate a deep love of home for all who listen.”

Additionally, there will be a short film to document the process by Cincinnati filmmaker Asa Featherstone. The film will be available in a virtual June premiere (date and streaming service TBA) and also made available featured on a new Wellness Channel for patients at UC Health, Greater Cincinnati’s Academic Health System, a program by The Well in partnership with UC Health Center for Health and Wellness, also supported by Dr. John and Susan Tew.

The first commission supported by Dr. John and Susan Tew, took place in 2018 with Brian Raphael Nabors and Max Raphael working with Cincinnati’s Music Resource Center’s youth. They created two compositions for Mindful Music Moments’ 2018/2019 playlist. The first theme was “Music as Medicine” (Fall, 2018) and the second is “One Giant Leap.” Here is a short video showing some of the highlights of the experience and a taste of one of the pieces of music.

Brian Raphael Nabors (b.1991, Birmingham, AL) is a composer of emotionally enriching music that tells exciting narratives with its vibrant themes and colorful harmonic language.

With an eclectic musical palate and crafty compositional technique to match, Nabors’ music draws from combinations of Jazz Funk, R&B, and Gospel with the modern flair of contemporary classical music. This interesting blend of sound worlds is one that continues to craft his unique musical voice.

He was named the 2018-19 Composer-in-Residence with the Castle of Our Skins organization in Boston, MA; a 2019 composer fellow in the American Composer’s Orchestra Earshot program with the Detroit Symphony Orchestra; a 2019 composer fellow with the Nashville Symphony Orchestra’s Composer Lab; and 2019 cycle five grand prize winner of the Rapido! National Composition Contest by judges Robert Spano, Jennifer Higdon, and Michael Gandolfi. Nabors is also a 2020 Fulbright scholarship recipient to Sydney, Australia, studying with composer Carl Vine at the Sydney Conservatorium of Music.

Nabors earned both a Doctor of Musical Arts and Master of Music degree in Composition at the University of Cincinnati College-Conservatory of Music (CCM), where he studied with Douglas Knehans, Ellen Ruth Harrison and Miguel A. Roig-Francolí.

The award-winning programs of The Well, including Mindful Music Moments, Mindful Poetry Moments, City Silence and True Body Project, combine aspects of mindfulness, arts, social-emotional learning, play, movement and poetry into practices for regular use within schools, hospitals, and communities. The Well is highly collaborative and partners with world-class arts, social service, education and health care providers to mindfully connect arts and healing content to those who need it most.

About The Cleveland Orchestra
Under the leadership of Music Director Franz Welser-Möst, The Cleveland Orchestra has become one of the most sought-after performing ensembles in the world, setting standards of extraordinary artistic excellence, creative music-making, and community programming. The New York Times has declared it “the best in America” for the group’s virtuosity, elegance of sound, variety of color, and chamber-like musical cohesion. Having celebrated its 100th birthday in 2018, the Orchestra is making its mark as a decidedly 21st-century ensemble, dedicated to serving its hometown and the art of music.

The Cleveland Orchestra’s commitment to education and community service was central to the organization’s founding in 1918, and has never been more important. Over the past hundred years, the Orchestra has introduced more than four million young people to symphonic music through live concert experiences. With the support of many generous funding partners, the Orchestra’s education and community programs now typically reach more than 100,000 young people and adults annually, helping to foster a lifelong relationship to music. As Franz Welser-Möst leads the Orchestra into its second century with a renewed commitment to education and community engagement based on his belief that every child’s life should include music, he continues to emphasize that the arts are critical to a well-rounded education.

Looking to the future, The Cleveland Orchestra strives to be Cleveland’s Orchestra by building community through music, removing barriers to participation, nurturing the next generation of musicians and audience members, and harnessing the life-changing power of music to make the world a better place.

With a rich tradition that dates back 125 years, the Cincinnati Symphony Orchestra is considered one of America’s finest and most versatile ensembles. Currently led by Louis Langrée, the Orchestra’s distinguished roster of past music directors includes Leopold Stokowski, Eugene Ysaÿe, Fritz Reiner, Max Rudolf, and Paavo Järvi. Matthias Pintscher is Orchestra’s Creative Partner, and previous artistic partners have included Lang Lang, Philip Glass, Branford Marsalis and Jennifer Higdon. The Orchestra also performs as the Cincinnati Pops, founded by Erich Kunzel in 1977, and is currently led by John Morris Russell with Damon Gupton as Principal Guest Conductor. The CSO further elevates the city’s vibrant arts scene by serving as the official orchestra for the Cincinnati May Festival, Cincinnati Opera and Cincinnati Ballet.

The CSO has long been committed to presenting the music of its time and has given historic American premieres by Claude Debussy, Gustav Mahler, Richard Strauss, Maurice Ravel and Béla Bartók and other prominent composers. It has also commissioned many works that ultimately became mainstays of the classical repertoire, including two iconic works by Aaron Copland: Fanfare for the Common Man and Lincoln Portrait. The Orchestra continues to actively commission new work, amplifying new voices from a diverse array of backgrounds, most recently with the Fanfare Project, a series of solo instrument works inspired by the COVID pandemic, recorded by CSO musicians and premiered online.

Committed to inclusion and relevance and to enhancing and expanding opportunities for the children of Greater Cincinnati, the Orchestra works to bring music education, in its many different forms, to as broad a public as possible. Education and outreach programs currently serve more than 80,000 individuals annually. The CSO/CCM Diversity Fellowship, a nationally recognized program in partnership with the University of Cincinnati College-Conservatory of Music, provides Masters degree-level education and professional development and performance opportunities for extraordinary young musicians from historically underrepresented populations in classical music.

In 2001, the Columbus Symphony celebrated its 50th anniversary with a sold-out debut at Carnegie Hall. Our popular summer concert series, Picnic with the Pops and Popcorn Pops, moved downtown in 2012 to the Columbus Bicentennial Pavilion at the Columbus Commons.

In addition to performances, the Columbus Symphony is proud to serve central Ohio through a diverse range of education and community engagement programs. These include Young People’s Concerts in the Ohio Theatre, six youth orchestras, free In-School Concerts for Columbus elementary schools, and the new Columbus Symphony Cares initiative, an innovative approach to community service through partnerships with non-profit human service organizations and public school districts.