Meet A Mindful Moment's Founding Board 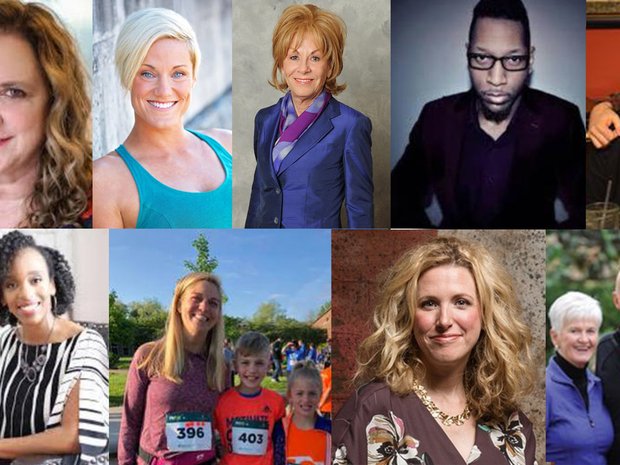 When Mindful Music Moments was piloted in 2016, Founder Stacy Sims wasn't sure if the idea had legs so the project lived and grew as a social enterprise, under the fiscal agency of ArtWorks.

By 2019, the program had grown to serve 70,000 students daily in more than 150 schools nationally and had been invited to create pilot experiences for hospital settings and a senior-focused program. In June, 2019, A Mindful Moment received its own 501c3, non-profit status.

A Mindful Moment's mission is to improve the mental and emotional well being, connectedness, and effectiveness of all citizens through arts integration, mindfulness, movement and healing-centered practices.

Margy Waller is an advocate for building community through the arts. She is a Senior Fellow at Topos Partnership (a national strategic communications organization), founder and Serendipity Director of Art on the Streets, and was a leader in the transformation of ArtsWave, an arts advocacy and support non-profit. She is an advisor to national organizations like Americans for the Arts, PolicyLink, and LISC, currently serving as field coordinator for four leading creative placemaking organizations, ArtPlace, Kresge Foundation, National Endowment for the Arts, and Arizona State University. Previously she was Visiting Fellow at the Brookings Institution, with a joint appointment in the Economic Studies and Metropolitan Policy programs.

Prior to Brookings, she was Senior Advisor on domestic policy in the Clinton White House. Before joining the Administration, Margy was Senior Fellow for Social Policy and Director of the Working Families Project at the Progressive Policy Institute. She also served as Director of Public Policy at United Way of America, and Director of Policy Development at Public/Private Ventures in Philadelphia, and a congressional fellow in the office of U.S. Representative Eric Fingerhut (D-OH).

Margy holds a Bachelor of Science in Communication Studies from Northwestern University and a J.D. from The Ohio State University. She comments on arts, place, and community at @margyartgrrl and her ArtsJournal blog, The Bright Ride.

Jill Smith became a Resource Coordinator at the Academy of World Languages in the spring of 2010 after a decade of nonprofit leadership. She was the Executive Director of the Center for Peace Education and then worked for four years for KnowledgeWorks Foundation and its subsidiaries. Smith also has a long career of community service and was recognized by Xavier University with the 2010 Magis Award for her outstanding work in “seeking peace and improving the world through education.” Smith graduated from Xavier with a B.S. in psychology. Mindful Music Moments began at the Academy of World Languages.

Jane is the Chief Financial Officer of Cavalier Distributing (Ohio), Cavalier Indiana, and Cavalier Florida, distributors of American craft and specialty import beer.
Jane started in public accounting with Grant Thornton and Rohrkemper Ossege and Combs and then moved into the non profit sector as Finance Director of the Contemporary Arts Center before joining Cavalier in 2013. Jane is a CPA.

Jane is a volunteer with UC’s Higher Education Mentoring Initiative and a docent for the CAC. She has served on the Board of the Alzheimer’s Association as Treasurer and President and is a graduate of the United Way’s Board Orientation & Leadership Development program. Jane served in the Peace Corps in Benin, West Africa. Education – BS Business / Accounting, Indiana University Bloomington

Heather grew up in Cincinnati, Ohio where she began her dance training at The School for Creative and Performing Arts. After performing professionally in San Francisco, Heather returned to her hometown to perform, choreograph, and teach.

Heather's choreographic reach spans from work for professional ballet companies to commercial dance choreography. She has had the opportunity to choreograph contemporary ballet works for multiple organizations including Cincinnati Ballet and Nashville Ballet, theatrical productions for Playhouse in The Park, and commercial choreography for "Zone Perfect Bars"and Fleetwood Mac through Lightborne. The Cincinnati Enquirer has called Heather’s work “mesmerizing”, “exuberant”, “moving”, “eloquent” and “heartbreaking”.

Heather is the Owner and Artistic Director of HBDC and DANCEFIX, a wildly popular dance workout class offered at Cincinnati Ballet, DANCEFIX Blue Ash, and Nashville Ballet. The New York Times has recommended her classes for out-of-town visitors and Cincinnati's CityBeat named DANCEFIX "the best damn dance workout" in the city. Heather served as a full time dance faculty member at Northern Kentucky University from 2008-2016. In 2011, The YWCA recognized Heather as a “Rising Star” and in 2015 she was named as “one to watch” in Cincinnati Magazine’s Future of Cincinnati edition.

Kami Lerma is an integrative health coach, physical therapist, and the founder of Wheelwork Integrative Wellness, LLC. Most of her twenty-one years of experience in healthcare and community health has been spent working with individuals and families, helping clients put practices in place that set them up to thrive. Throughout those years, she has also studied holistic wellness practices and modalities including energy healing, nutrition, aromatherapy, massage and bodywork, prayer and meditation, and acupressure. Kami has also played a role in education as a parent/caregiver, professional, and community education facilitator and as an editor for one of the top online continuing education platforms for physical therapists. Her training from Duke Integrative Medicine as an Integrative Health Coach allows her to merge her knowledge and experience in the use of conventional and complementary practices to help others improve their health and wellness and find balance and joy in their lives.

Brian Raphael Nabors is a composer of emotionally enriching music that tells exciting narratives with its vibrant themes and colorful harmonic language. Mr. Nabors has worked with institutions such as the Cincinnati Symphony Orchestra, Detroit Symphony Orchestra, as well as performed at many events across the US, including the Texas Music Educators Association Conference (TMEA), the Midwest Composers Symposium, and the International Double Reed Society Conference (IDRS). He has received awards from the Music Teachers National Association (MTNA), Alabama Music Teachers Association (AMTA), the Birmingham Music Club, and has been performed by artists such as the Detroit Chamber Winds & Strings, Atlanta Chamber Players, and Unheard-of//Ensemble.

He was commissioned to create two pieces of music for Mindful Music Moments in 2018, working with youth at Cincinnati’s Music Resource Center.

He was recently named the 2018-19 Composer-in-Residence with the Castle of Our Skins organization. In January 2019, Brian was named the Grand Prize winner of the Rapido! National Composition Contest Take Five by judges Robert Spano, Jennifer Higdon, and Michael Gandolfi. This includes the expansion of the competition chamber work to be performed by all of the participating chamber ensembles nationwide, a two-week artist residency at the Hambidge Center for the Creative Arts, and a brand new commissioned work with the Atlanta Symphony Orchestra in their 2019/2020 season.

Nabors earned both a Doctor of Musical Arts and Master of Music degree in Composition at the University of Cincinnati College-Conservatory of Music (CCM), where he studied with Douglas Knehans, Ellen Ruth Harrison and Miguel A. Roig-Francolí. Prior to graduate studies, he obtained a Bachelor of Music Theory & Composition degree from the School of the Arts at Samford University in Birmingham, AL, where he studied composition with Sarana Chou and piano with Kathryn Fouse.

Dianne is a person who leads by example. She is a keen strategist and a proven fundraiser, and this skill set has enabled her to excel as Board Chair of many institutions, including Greater Cincinnati Foundation, Isaac M. Wise Temple, Jewish Family Foundation, Cincinnati Park Board, University of Cincinnati’s CCM Friends Board, and Family Independence Initiative Advisory Board. Dianne also has been an instrumental board member and officer of Cincinnati Symphony Orchestra, in addition to her service to 4C for Children, Cincinnati Preschool Promise Taskforce, and many other organizations. Professionally, Dianne has a master’s degree in special education focusing on educational diagnostic services. She has taught at University of Cincinnati and has worked as associate director A.D.D.P. Division of Adolescent Medicine at Children’s Hospital Medical Center. She also has led her own private practice as an educational diagnostic specialist and school consultant. Previously, Dianne was recognized as Cincinnati Business Courier’s 2017 Outstanding Director of the Year, Association of Fundraising Professionals 2015 Volunteer of the Year, Jewish Federation of Cincinnati’s 2006 Robert V. Goldstein Volunteer of the Year, and one of 1999’s Cincinnati Enquirer Women of the Year.

Katie Syroney has been an enthusiastic promoter of the Greater Cincinnati arts community for more than two decades. Her love of music began as a child while sitting at the piano with her grandmother, and in the following years, she discovered a passion for working behind the scenes to make the arts accessible and welcoming to all.

Katie’s affiliation with Cincinnati Opera began in 1996, and she has since served in a number of marketing and communications roles with the company, most recently as interim director of communications. From 2005 to 2009, Katie was the public information officer for the College-Conservatory of Music at the University of Cincinnati, where she was responsible for promoting the college’s roster of more than 1,000 annual events. Her work there resulted in positive coverage for the school in such national media outlets as The New York Times, NPR, and CBS Sunday Morning.

As a volunteer, Katie has been involved in efforts designed to deepen engagement with the arts and education among young people and families, including Mindful Music Moments. She has been named a YWCA Rising Star and was a member of the Greater Cincinnati Chamber of Commerce’s WE (“Women Excel”) Lead program. Katie earned a BA at Miami University (Ohio) and an MBA from the University of Cincinnati.

As director of community outreach and philanthropy for integrative medicine at UC Health and UC’s College of Medicine, John Tew lectures frequently about the links among longevity, cognition and the pillars of healthy living. This follows a long tenure with the UC Department of Neurosurgery and UC Neuroscience Institute. He also envisioned and co-founded the UC Gardner Neuroscience Institute.

Susan Tew is a strong supporter of education. She is an emeritus member of the Catholic Inner City Schools board of trustees. She works with the Adult Spirituality Institute at The Athenaeum of Ohio and with her husband at Sempre Sano, an annual wellness conference. She facilitates faith enrichment courses and meditation practice.

Stacie Freasier is a social sector enthusiast and arts and culture strategist with over fifteen years of nonprofit leadership experience. She has served a kaleidoscope of missions in a variety of functions at Planned Parenthood, the Council on Foundations, the Society of Hispanic Professional Engineers Foundation, the San Diego Human Dignity Foundation, and notable academic institutions.

Stacie is Founder and CEO of c3 Catalyst, a boutique consultancy focused on capacity building for music-centric nonprofits. She also serves as a member of the La Piana Consulting team, where she supports nonprofit clients across the U.S. with strategic planning and strategic restructuring.

Stacie serves on the board of directors for the Playing for Change Foundation, a global nonprofit focused on creating positive social change through music and arts education. She has an MA in Nonprofit Leadership and Management from the University of San Diego, a BA in Sociology (Music minor) from the University of Texas at Austin, and an Executive Certificate in Arts and Culture Strategy from the University of Pennsylvania in partnership with National Arts Strategies.