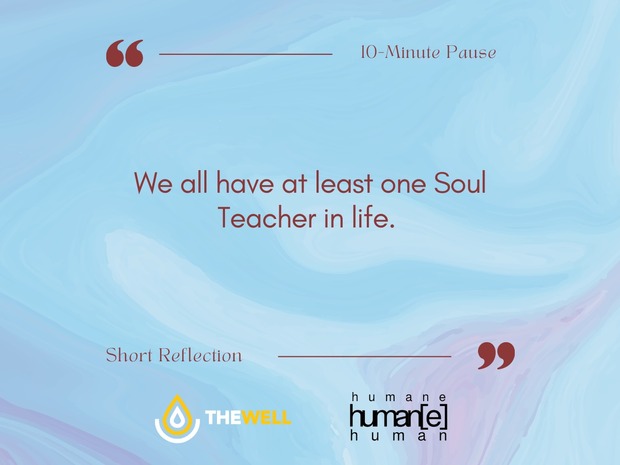 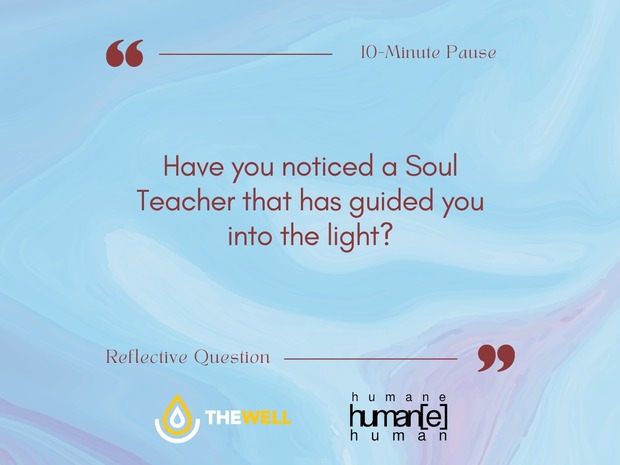 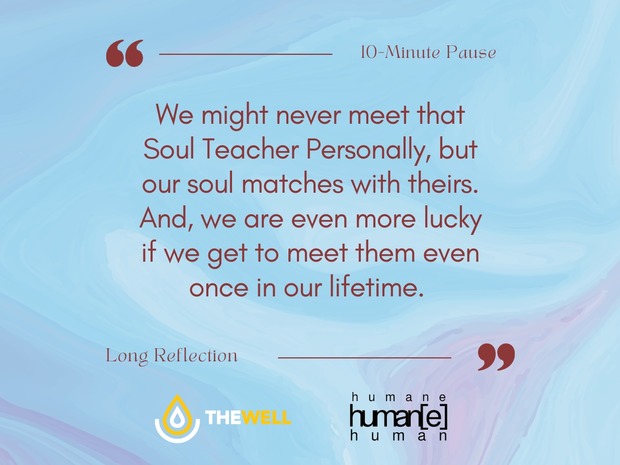 I first heard of the term “soul sister” from my Cuban-American friend during my time studying for my peace education masters at UPEACE, Costa Rica. I never knew that “soul" could be outside of oneself, outside myself, and even shared with others. Perhaps, you have heard of the term “soulmate,” but I don’t think I have found mine, so, I always focused on my own soul. How about you?

While you contemplate my question, I have another one for you. Have you found a beautiful soul who transcended your soul to awakening? You might not know this person personally, but you feel that your soul matches with theirs. The most influencing soul teachers for me are Thich Nhat Hanh, Desmond Tutu, Gus Dur, Dalai Lama, Zon Jan, Rumi, Kahlil Gibran, Krista Tippett, Alex Elle, Muhammad, Ali ibn Abi Thalib, Bahá'u'lláh, and many more.

Since the pandemic struck, I was grateful to learn about The Well. The first event I attended was Mindful Poetry Gathering on April 16th, 2020. I will always remember the date because the pandemic turned me into a thirsty and exhausted shepherd. Though I needed to wake up at 2 am to attend the event, it was priceless. I never knew that I would find the medication that my soul needed through poem and meditation. I never knew that I could write a poem. I also never expected to become friends with the founder of The Well World, Stacy Sims, and two of the members: Rowe Schnure and Sarah Yeung. Being invited to be a fellow for The Wellspring Fellowship 2022 was another blessing that I continue to mention in my gratefulness grounding and rooting daily.

I believe many good things happen for many reasons. Today—Sunday, January 23rd, 2022—I felt much calmer and I am grieving in joy right now. This is my first experience to grieve in joy for my soul teacher Venerable Thich Nhat Hanh who passed yesterday, Saturday, January 22nd, 2022; just twenty seven days after Archbishop Desmond Tutu. I might have never met him in person, but my soul and many other souls have claimed that he is our soul teacher. His inner peace has radiated to each and every soul who is in need of guidance and partner in this life voyage to discover the hijab—the veil—that covers our Light, not once, but all the time. That’s why his book “Peace is Every Step” inspired me to make a weekly peace circle for a month at the end of 2020 which I named PIE (Peace is Every Time).

Yesterday when he passed, I decided to go out, to admire the sunset by riding a motorbike taxi in South Jakarta. I cried when I read the condolence letter from the Dalai Lama, but my tears felt kinda stuck. They were not flowing. When I witnessed the soft pinkish purplish cotton candy sunset, drops of tears began to fall. I stopped by a place near my former office. That place was not really a mall, but it has everything for me: a cinema, park, restaurants, and coffee shops. I booked a movie ticket for “Nightmare Alley” directed by a Mexican film director, Guillermo del Toro, who also stole my heart with his “The Shape of Water.”

I had an hour wait for the movie so I stopped by a Peranakan restaurant called Ah Mei. Whenever I am not in the mood for coffee, but I want to sit somewhere other than my apartment, I go there. I don’t need the menu book because I always know what to order: Plain Roti Prata and Hot Tea O. Peranakan culture and cuisine always warm my heart. Their food has become one of my comfort foods during low moods. My first encounter with Peranakan people was when I became a volunteer for a project called ASEAN (Association of South East Asian Nations) Young Heritage Leaders in Malacca, Malaysia. Malacca is a heritage old town protected by UNESCO. (By the way, Peranakan is a unique mix of Chinese culture with locals in the Nusantara region.) The history of Nusantara was a long story which encompassed the archipelagos in South East Asia. Before I was assigned to Malacca for two and half weeks, I spent my first seventeen days in Bangi, a town in Selangor neighboring the capital Kuala Lumpur. There, I learned a lot from Indian-Malaysian communities.

While sitting in Ah Mei, I opened my laptop and looked for my collections of ebooks and photographs of Venerable Thich Nhat Hanh. This time my tears fell like a waterfall. I even kissed and hugged his pictures and ebooks on my laptop screen. I had no shame at all if people would think I was weird or strange. Then, I reread some parts of my favorite three books of his. Here I will share them with you. Probably they could be mindful references for your grounding and rooting too.

I think this is one of his most popular books. Before I tell you my favorite part of the book, I want to paraphrase what Rebecca, Abe’s mother, said in the movie “Abe” (2019): “We don’t need to wait for death to be in heaven. Heaven is here and now on earth where we create peace for ourselves and for our human fellows.”

This movie is fully recommended for those who want to taste a hybrid culture from a mixed marriage of a Jewish-Israeli woman, Rebecca and a Muslim-Arab man, Amir who later had a son named be, who had abundance of imagination, creativity, and peace by combining the cuisines of his parents’ cultures, which created controversy and disagreement between two families especially among the grandparents. He later on met his soul teacher, an African-Brazilian chef, Chico, who became his main muse to be brave enough to engage in the trial and error of fusion food.

In the final chapter of The Art of Living, Chapter 7: Nirvana is Now, Venerable Thich Nhat Hanh wrote exactly the same idea as Rebecca said to Abe. Nirvana that comes from Sanskrit or Sansekerta—Indonesian translation—which is often simplified as heaven or paradise. However, from him I learned the real root meaning of Nirvana which means “to blow out” or “to put out” or “to extinguish.” Then, he reworded it as “cooling,” “Nirvana is a pleasant state of coolness and freshness that we can all touch in this very life.” It is up to us to begin our own nirvana. Nobody really knows what is next after life, so, we better start here and now.

Thich Nhat Hanh was the first person who ever told me that meditation doesn’t require separation from our daily life. Even in the middle of our busyness, we still can meditate. Breathing is the anchor of our soul. By breathing mindfully we are doing meditation. Even when we don’t get a seat in a crowded bus and train—which often happened to me when I commuted a lot in Jakarta by public transportation before the pandemic—we still can meditate. When we are standing mindfully, we are fully aware that we are standing, we are being here with ourselves. No matter how strong the shaking of that crowded bus or train, we are not annoyed because we are an ultimate being that radiates peace within. My favorite mantra during my mindful breathing that I chant repeatedly by heart is, “Breathing in, I calm my body. Breathing out, I smile. Dwelling in the present moment, I know this is a wonderful moment!”

This book he wrote for answering kids’ questions about life, death, family, friendship, and everything in between. Within me and—I believe—many of us still have these inner children who are in need of answers to questions that we raised when we were kids and were often judged as annoying and silly ones. Many of them are not yet answered and even forgotten. This book brought such relief to me because he made me believe that no question is too silly and nobody is too silly either to raise that kind of question. For instance: why do I become a human?, why was I born?, how long am I going to live?, why does the world exist?, where am I after life?, what is death?, what is religion?, who is god?, why do people make wars?, what is peace?, what is conflict?, what is mindfulness?, and many more.

He said in the beginning of the book, “A good question doesn’t need to be long. If it comes from your heart, it can help a lot of people. These questions are real questions that real children have asked me. I always try to give an answer that offers the best of myself. I am much older than the children who asked these questions, but when we sit and breathe together, it seems that we are the same. We are each other’s continuation.”

I am grieving in peace because I remember Venerable Thich Nhat Hanh said, “What is after life? Tomorrow, I will continue to be. But you will have to be very attentive to see me. I will be a flower, a or a leaf. I will be in these forms and I will say hello to you. If you are attentive enough, you will recognize, and you may greet me. I am a continuation, like the rain is a continuation of the cloud.” Today I am grieving in joy because at noon the clouds are so white and the sky is so blue, and at sunset the sky and clouds turn pinkish and purplish like cotton candy. Indirectly, these closing words remind me of what Oliver Burkeman told Krista Tippett in On Being about Time Management for Mortals: "It’s the feeling of realizing that you’d been holding yourself all this time to standards you couldn’t reasonably be expected to meet. And this realization isn’t merely calming, but liberating, because once you’re no longer burdened by such an unrealistic definition of a life well spent, you’re free to consider the possibility that many more things than you’d previously imagined might qualify as meaningful ways to use your finite time. You’re freed, too, to consider the possibility that many of the things you’re already doing with it are more meaningful than you’d supposed and that until now, you’d subconsciously been devaluing them on the grounds that they weren’t ‘significant’ enough."

Isti Toq'ah is the 2022 Wellspring Fellow. Additionally, Isti is pursuing her dream of a Ph.D in Peace Education from UPEACE in Costa Rica and has launched a campaign for financial support. You can learn more about her Ph.D plans and how to support her here.